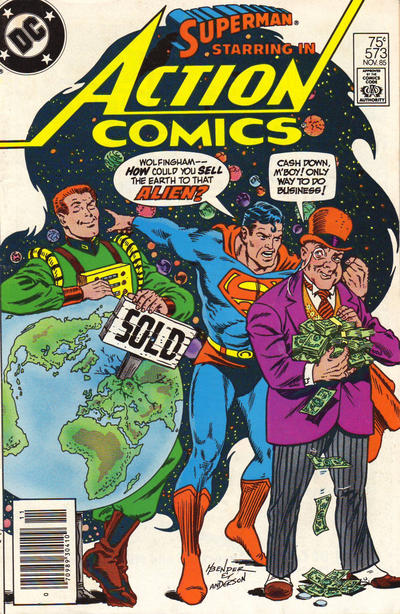 I’m saddened to hear about the passing of Murphy Anderson, at the age of 89. He was one of those artists whose work was so perfect that, when I was a young kid and reading my first comics, it never dawned on me that a human hand could be behind those pictures. They just had to magically roll off of a printing press somehow.

Eventually I got to meet Murphy and saw him once in a while, back when I was doing a few Superman stories for our mutual editor, Julius Schwartz. I never saw him without a coat and tie, and he was one of the more soft-spoken and unassuming giants I’ve met.

When Murphy learned I was from Cincinnati, he got as excited as I’d ever expect to find him. He recalled for me his past visits to Cincinnati, and in particular to the Ohio Book Store on Main Street, his area destination for buying vintage cartooning and art books.

At the time that I met him, Murphy was currently doing a series of stories featuring Golden Age characters for DC’s Secret Origins title, an assignment he said he really enjoyed.

Murphy inked one cover (pencils by Howard Bender) for a story I wrote, an Action Comics issue. That was a big fat checkmark on my bucket list, to be able to count him among my collaborators, but more importantly, to have been able to get to know him even just a bit.